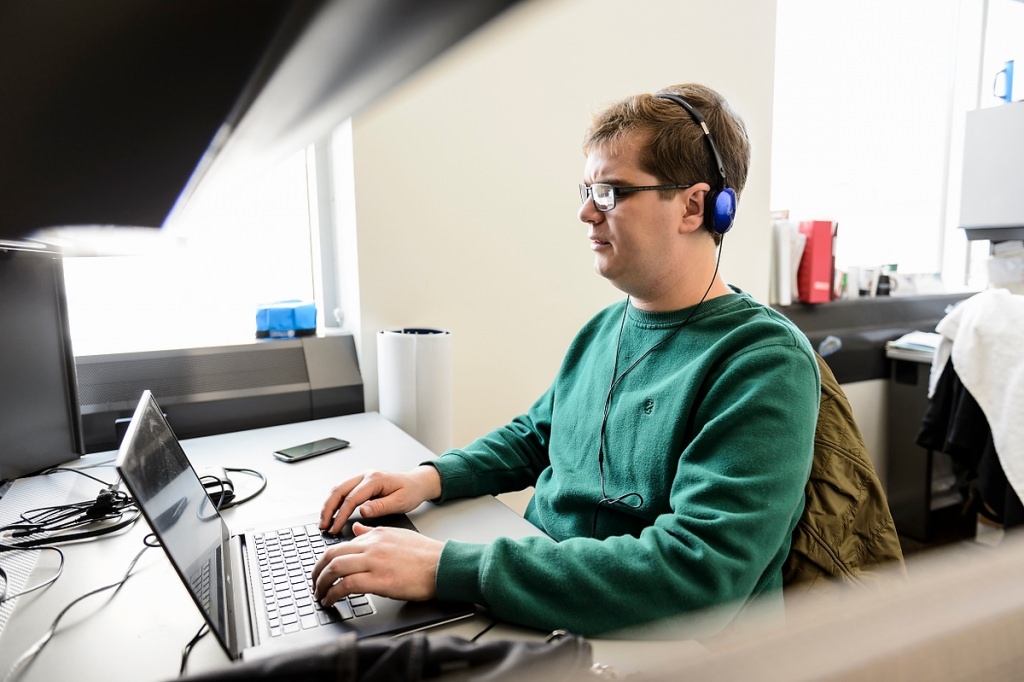 When you ask questions about Drew Hasley, the answers often revolve, paradoxically enough, around questions. He was selected for his first biology research job at Albion College in Michigan by a professor who was impressed by the difficulty of his questions in class.

At the University of Wisconsin–Madison, Hasley’s graduate advisor, geneticist Francisco Pelegri, fondly describes him as “extremely well-rounded and always raising questions and thinking about various aspects of a problem.”

A question that has bedeviled the field of developmental biology for 150 years surfaces when you ask Hasley about his dissertation research in the Pelegri lab. The dissertation was built on three distinct projects, he says.  “The thing that ties them together is, how do you go from a single cell to a fully functioning organism with, in the case of a human, trillions of cells? How does development happen?”

An unspoken question lurks behind some of these conversations: How did Hasley accomplish the work necessary to become the first legally blind person with a UW–Madison doctorate in genetics — and possibly only the second blind UW–Madison Ph.D. in biological sciences?

What makes Hasley, now 30, special? For one thing, Drew, as he’s universally known, is approachable, optimistic, quick to laugh — yet he’s determined to build on his record of success so “there are more people like me” in the sciences. 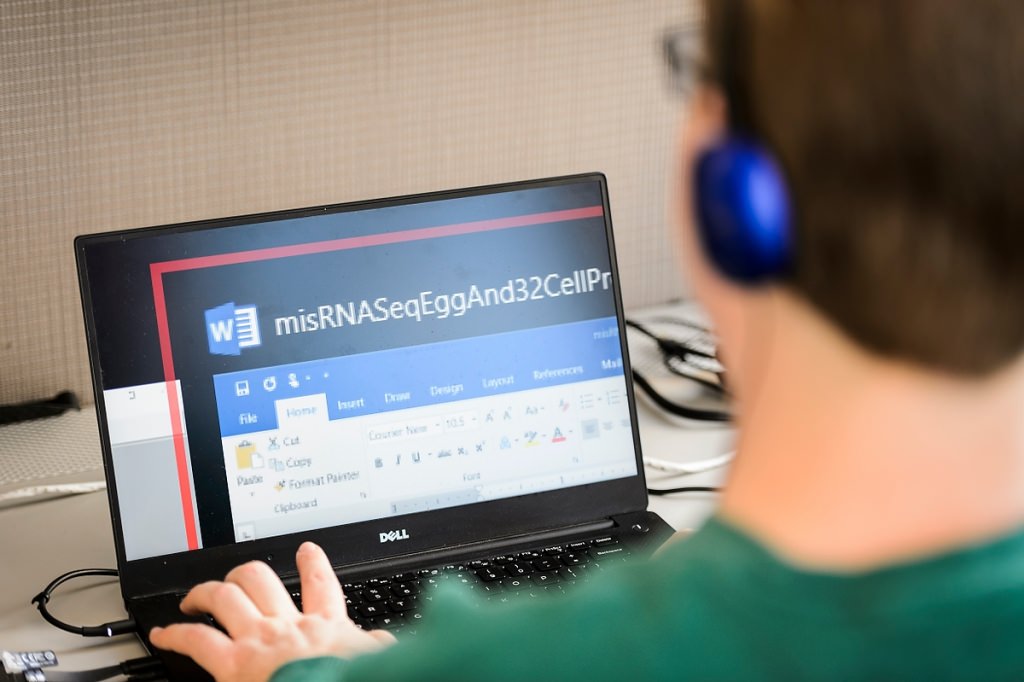 Drew Hasley uses the aid of enlarged text displayed on his laptop as he works on a statistical program in the Genetics-Biotechnology Center Building. Photo: Jeff Miller

The discussion turns, logically enough, to his parents. “This conversation would not be happening,” he says, “if I did not have parents with college educations who could do research, who could go to the library and learn enough to say to my doctors, ‘I don’t think that diagnosis makes sense because of this and this.’”

As a child in Arizona and then Colorado, Hasley was diagnosed with Leber congenital amaurosis, a mutation that has destroyed most of his retinas. He says his mother, a historian, and his father, an aircraft mechanic, “did not fall for the ‘woe is me, poor parents with this disabled child’ routine. Kids pick up on that. They were really supportive of just about anything I wanted to try, and were very active in suggesting things I could try.

“From the beginning, in discussions with my schools, they were already thinking, ‘What does this do for college?’” His parents decided not to waste time on handwriting, correctly anticipating that his future would be accessed through a keyboard. “I had an Apple IIe in 1st grade, and while everybody else was learning cursive, I was learning typing.”

The son inherited (perhaps it’s more accurate to say absorbed) his parents’ avoidance of self pity, and the only serious regret Hasley expressed during several hours of conversation concerned the invitation to play violin from legendary UW–Madison genetics Professor James Crow, an accomplished violist.

“Not saying yes is one of my biggest regrets,” he says. “This was my first year here. He was so nice, and I remember thinking, ‘You are stupid, you like to play but you are afraid to carve out the time’” to learn the piece by ear — which he preferred to the difficult job of reading music in braille.

His mother and father “did not fall for the ‘woe is me, poor parents with this disabled child’ routine. Kids pick up on that. They were really supportive of just about anything I wanted to try.”

Hasley knew the violin was demanding. “Since 4th grade, I was in a symphony or orchestra the whole time. It wasn’t every kid who managed to fit playing in the orchestra every semester in four years of college.”

His appetite for genetics whetted by that college job, Hasley applied to six graduate programs and was accepted at three. Although he’d barely heard of UW–Madison before he began the grad school search, Wisconsin quickly stood out. “I noticed that the faculty I was interested in working with had all gotten their Ph.D.s here. It was like ‘follow the money.’ If they all had gone here, and were doing cool things, maybe I should look seriously at UW.”

Wisconsin also stood out for the practical, sensitive and focused discussions of how he would accomplish his research. “Disability wasn’t like an elephant in the living room,” he says. “When I walked in on my first morning, Jean Petersen, the department’s graduate coordinator, said, ‘You mentioned you were bringing a laptop. I don’t know if it will be helpful, but I put all the handouts on a CD.’”

Petersen had also penciled in a meeting with the director of the McBurney Disability Resource Center. UW–Madison was the only school to offer such an arrangement up front, says Hasley, who notes that the department’s willingness to offer the accommodations without assuming their necessity “said something big about the culture in Wisconsin.”

Regarding the inevitable question about which lab work he could handle, he was frank. “Some I can do, but we’d need to try the protocol to see how picky it is.” Once accepted at Wisconsin, Hasley began probing the genetic and non-genetic controls on development with help, as needed, from an undergraduate assistant. 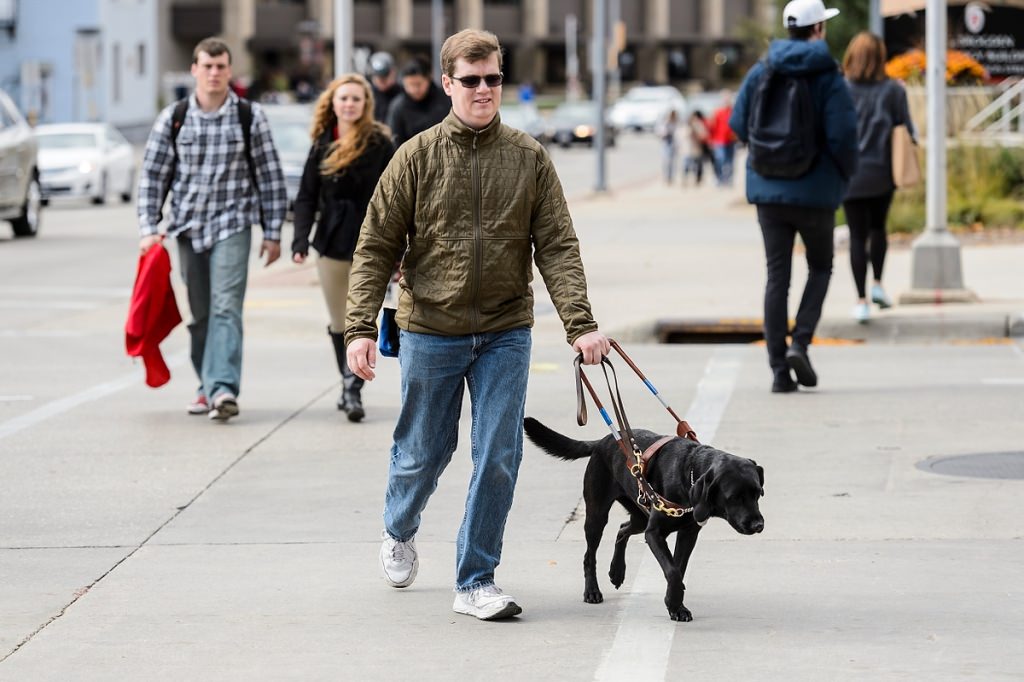 Drew Hasley and his guide dog, Shade, walk along West Johnson Street toward a meeting at the McBurney Disability Resource Center on the UW–Madison campus. Photo: Jeff Miller

Much of his research involves databases, and although Hasley is obviously facile with assistive software, he likely can keep more facts in his mind than those of us who rely on paper or screen.

Finally, on Aug. 23 of this year, after a frenetic finish, he defended his dissertation. “He defended his research by giving one of the best talks of my lifetime,” says Ahna Skop, an associate professor of genetics and member of his thesis committee. “I was truly humbled and in awe of all of the hurdles it took to get to this moment.” Serving on his committee, she adds, was “probably one of the most amazing things I’ve experienced as a professor.”

With his dissertation safely stashed in Memorial Library, Hasley is taking time to relax, finish a postdoctoral fellowship, and look for work. “Whatever it is must involve teaching,” he says. “I see an opportunity to improve biological education in a way that will get more people into it who are like me. There is no reason for me to be this rare.”

Hasley knows that his longtime scientific inclination is part of the explanation for why he got so far. “I liked science and started out as a total astronomy nerd,” he says. “But the next generation of science students who are disabled should not have to be as passionate about science as I was. They should be able, like their peers, to dip a toe in and have fun. As it is now, you have to be committed, and that’s not fair. If a school’s version of accessible is assigning you to be the person who takes the notes, would you think a career in life science is possible?”

Serving on Hasley’s thesis committee was “probably one of the most amazing things I’ve experienced as a professor.”

And so Hasley is helping adapt a game called the Great Clade Race, which teaches evolution at the high school and college level. (A clade is a branch of the evolutionary tree.) “This is a tactile activity to teach phylogenetic trees in a way that people can touch and all students can use,” he says. Essentially, users will trace the evolution of features — like limbs, lungs or hair — making choices that eventually result in a tree showing the relationship among several specialized organisms.

The project is being field tested in Oklahoma. “We could not have done this without Drew,” says Kristin Jenkins, who is collaborating on the project as director of Bioquest, a national science curriculum development organization. “His understanding of the challenge is unique, and he is a remarkable person.

“I think Drew has decided that one of his tasks is to enlighten the rest of us who are limited by our vision.”