A day in the life of a student tour guide, the red-polo-wearing ambassador for thousands of campus visitors 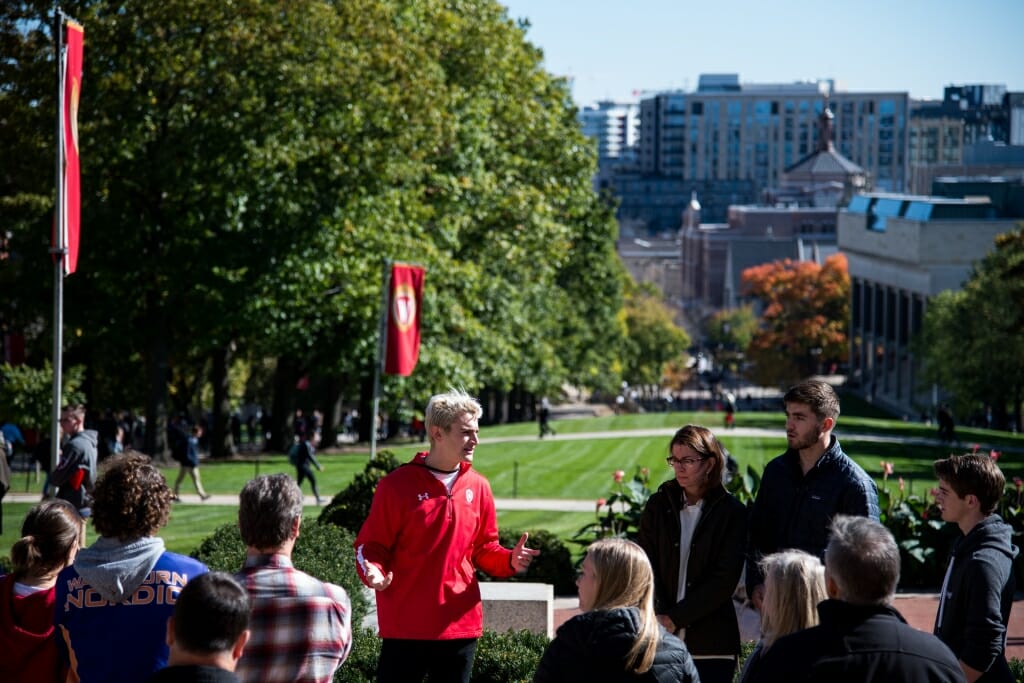 During an autumn tour, student guide Brandon Steer from Campus and Visitor Relations (CAVR), shows prospective students, family, and guests around campus at the top of Bascom Hill at the University of Wisconsin–Madison on Oct. 18, 2018. Visitors can see down State Street to the capitol building from the top of Bascom Hill.(Photo by Lauren Justice / UW–Madison)

Did you know that when Camp Randall is filled to its 81,000 person capacity it becomes the 5th largest city in the state of Wisconsin?

And did you know that the naturalist John Muir, a former UW student, had problems waking up in the morning, so he invented a bed-tipping machine that would put him on his feet? But that his original wake-up plan was to tie a piece of string to his big toe, dangle it out his window, and kindly ask the janitor to yank on it every day at 7 am?

Or that that some of the earliest UW students who lived in North Hall kept cows on Bascom Hill?

Student tour guides do – and a whole lot more.

The tight-knit group of 60 students, who can be spotted almost daily in their red polos leading packs of prospective students and their parents around campus, know more about University of Wisconsin’s past, present and future than arguably anyone else. But, oftentimes the first point of contact between the university and the roughly 80,000 people who visit it each year, they are much more than trivia savants. They are de facto university ambassadors and academic advisors, elementary school teachers and dad joke connoisseurs.

“We like to say that we’re kind of like mailmen,” Erin Faella, a veteran tour guide, said. “We tour in every single kind of weather. We tour in the hail, we tour in the sleet.”

In the winter, they swap their polos for windbreakers and Under Armour parkas. Their winter tour groups typically know what they’re getting into, though.

“We always like to say, if you like UW in the winter, you’re going to love it in the summer.”

The most iconic of tours – and the one you most likely took at some point in your life – is the prospective student tour, where students torn on whether to enroll at this college or that one will take a guided tour through the campus’ most important landmarks. Every college does it, but UW’s is special.

A partnership between the Office of Admissions and Recruitment and Campus and Visitor Relations, the tour gives future badgers and their families the opportunity to experience our vast campus and learn about the variety of offerings at the university including research, academics, student life, student services, housing, and more. Having the tour led by student guides offers the prospective students and families a chance to ask current students about their experience to get a greater sense of what it’s like to be a badger at UW–Madison. 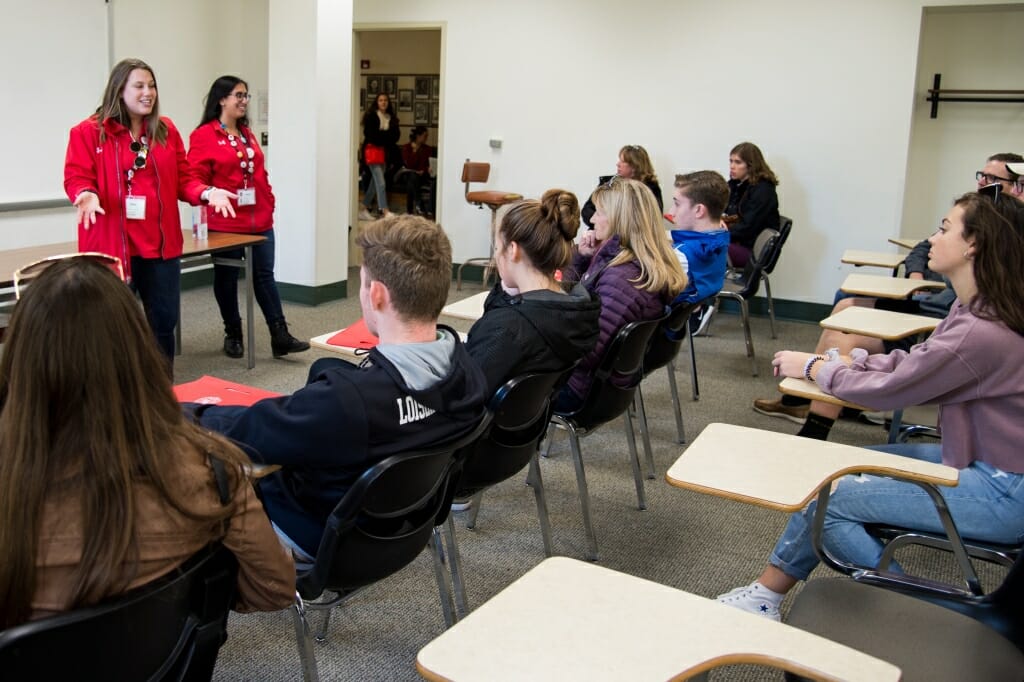 Like the typical high schooler, Ali Dusek took a “college trip,” touring a bunch of schools across a handful of days, but it was Madison’s tour that stood out. It was the place where she felt most comfortable at, where she felt she could fit in, and where she would have the opportunities that would help her grow. And tour guides played a decisive role.

“It was really more of feeling than anything, but I don’t think I would have gotten that feeling without going on tour and walking around campus and getting to talk to current students,” Dusek said.

Grasping that “feeling” of a place can take months – maybe years – when you’re in a new place. It’s the tour guide’s job to evoke that feeling in 75 short minutes, an incredibly challenging task that requires skill, creativity, and flexibility.

No two tour guides tackle the challenge in exactly the same way. Some, like Jinan Sous, impart that feeling by developing an honest, personal connection with individual students.

Last April, she discovered she had a lot in common with a student on her tour, both liking the same classes and interested in the same campus activities. While the stops at each landmark are the focal points of the tour, tour guides say it is often the time spent walking between stops, when students too shy to ask questions in front of the group let their guard down, that the most important and impactful moments happen.

Eventually, the student admitted something: they were torn between UW and one other school.

While tour guides are handed a hulking three inch binder chock full of information and put through an exhaustive weeklong training session, most of it is unscripted. Sous, acting not as a saleswoman but as a friend, discussed the student’s apprehensions and desires with honesty. By the end of the tour, the student was set – she would enroll at UW. 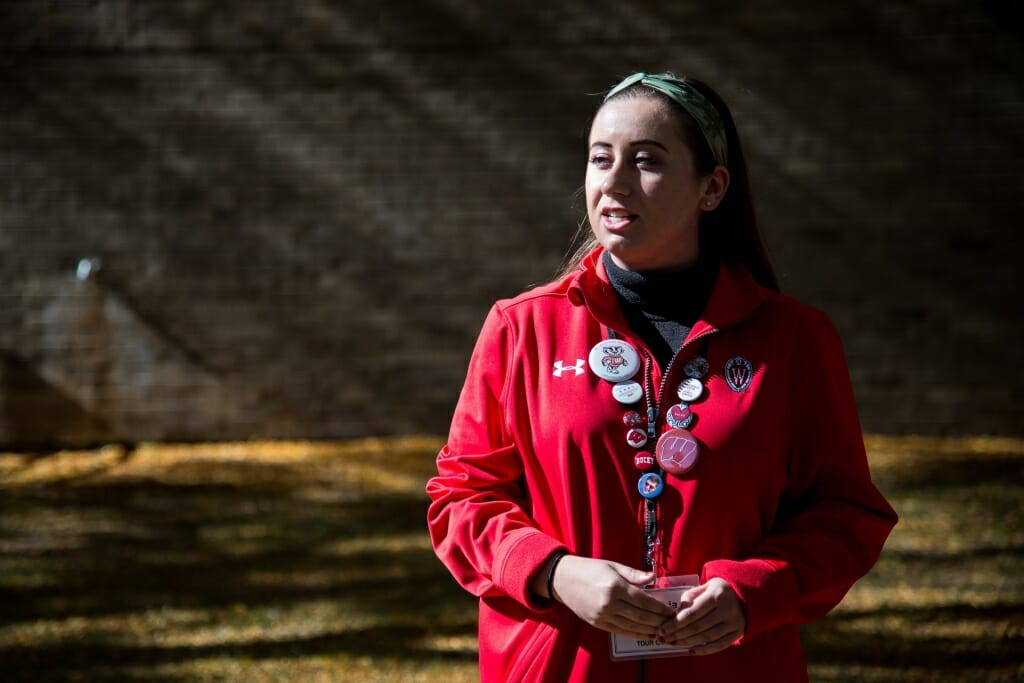 “I remember feeling that it didn’t feel like just a job,” she said. “It felt like I was walking around campus with a group of people showing them the place I love.”

Later, at the end of June, Sous ran into the student and their family again while working at SOAR, the orientation program for first-year students. Everyone was giddy with excitement, Sous included.

“That was really cool for me knowing I was able to make that connection in that one tour, in that 75 minutes, and then to see them again and to have that connection,” she said.

Faella forms personal connections, too, but after being a tour guide for three years, she now has a few tricks up her sleeve. One is the Memorial Union Terrace.

She leads her groups on a specific route through the dark-wood interior of Der Rathskeller and then out onto the Terrace. When they open the door and step out, the sudden expanse of the lake, the piercing sun, and the chairs, each one popping with color, seals the deal more times than not.

“There’s always a big wow factor. Everybody gets their phones out and starts Instagramming,” she said. “By the time they exit out onto the terrace, everyone is just, like, so in love with the UW.”

Dusek prides herself on how factual her tours are.

The prospective student tour forms a giant loop that starts at Union South and runs along the Chemistry building to Grainger Hall. It then wraps around East Campus Mall and Library Mall and leads into Memorial Union before heading up Bascom Hill. Its last leg goes through Chamberlin Hall and down into the Wisconsin Institute of Discovery before finishing where the tour started at Union South.

At each point of the stop, everyone – even lifelong Wisconsinites – will learn something new about UW, Madison and Wisconsin.

They will also learn that walking up Bascom Hill everyday for an academic year is the equivalent of walking up Mount Everest, although most will probably have reached that conclusion independently by the time they reach the top. 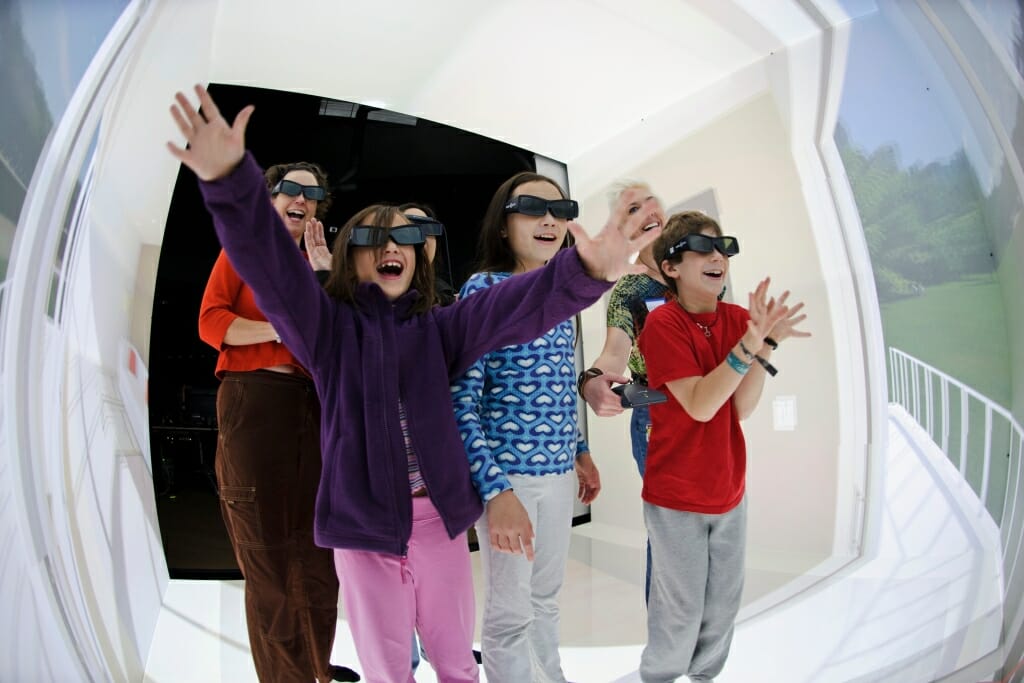 Wearing 3-D eyeglasses and holding a virtual-reality controller, visitors step through a room-sized, computer-generated version of a living room patio door and interact their surroundings during a Living Environments Laboratory Open House at the Wisconsin Institutes for Discovery (WID) at the University of Wisconsin–Madison on Nov. 5, 2011. The room consists of a Cave Automatic Virtual Environment (CAVE), where scientists can re-create a place, observe how someone might use personal-care technology and make related changes earlier in a product’s development process. The lab is led by Patricia Flatley Brennan and is part of the publicly funded Wisconsin Institute for Discovery. (Photo by Jeff Miller/UW-Madison) Photo: Jeff Miller

And at the Wisconsin Institutes for Discovery, tour members will see first-hand the scientific equipment and groundbreaking architecture that makes the building one-of-a-kind. They will learn about WID’s Living Environments Lab, a room that takes 360-degree images of people’s homes and replicates them in virtual reality to explore what helps or hinders people from adhering to a specific medical regimen, like measuring blood glucose in people living with diabetes.

You never know who you might run into, too. Once, as a tour guide explained the Morgridge Institute, the private, nonprofit biomedical research institute housed in the Discovery building,  John and Tashia Morgridge, who started the building with a generous investment, joined the tour.

Dusek’s parents, who live in Alaska, surprised her once, too. She burst into tears in front of her tour group, she admits.

“They had gone on one of my tours before. That’s how they knew where to find me.”

But UW’s tour guides are not only tasked with prospective student tours. They also give tours to children (some as young as five), alumni (some as old as 80 or 90), and all kinds of specialty tours, including one tailored to foreign delegations.

While every tour is different, some tour guides find themselves in a rut after a while and recite the same stories and facts over and over again.

Faella, who trains tour guides, advises them to personalize it. It’s worked so far for her. She’s led so many tours over the years she’s lost track of how many, and yet she finds something in each one to make them fresh, exciting experiences.

On a tour guide’s final tour before they graduate, tour guides, information guides, and others from Campus and Visitor Relations throw a ceremonial send-off. As the tour guide turns the final corner of their final stop, a huddle of red polos and windbreakers, smiling and cheering, comes into view. Uzeirovic, who graduates this May, had been a tour guide for nearly his entire time in college when he turned that corner.

“You always feel like you have a place within the organization,” he said, and the group, blossoming throughout the years from coworkers into friends, had become a community on campus, not just a workplace.

“To sign off and say your last ‘On, Wisconsin’ to your group, it’s just a remarkable experience.”