Coral reefs are vibrant communities that host a quarter of all species in the ocean and are indirectly crucial to the survival of the rest. But they are slowly dying — some estimates say 30 to 50 percent of reefs have been lost — due to climate change.

In a new study, University of Wisconsin–Madison physicists observed reef-forming corals at the nanoscale and identified how they create their skeletons. The results provide an explanation for how corals are resistant to acidifying oceans caused by rising carbon dioxide levels and suggest that controlling water temperature, not acidity, is crucial to mitigating loss and restoring reefs.

“Coral reefs are currently threatened by climate change. It’s not in the future, it’s in the present,” says Pupa Gilbert, a physics professor at UW–Madison and senior author of the study. “How corals deposit their skeletons is fundamentally important to assess and help their survival.” 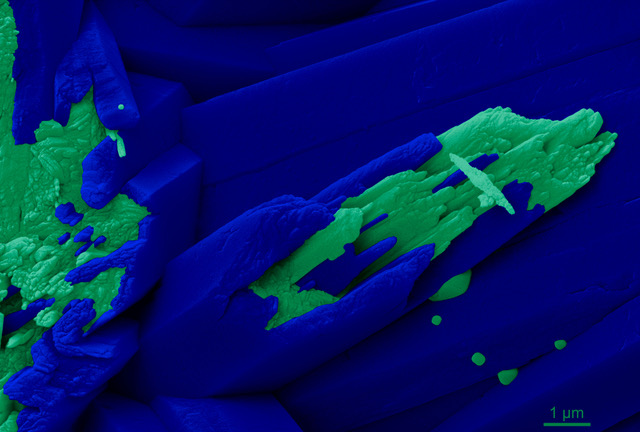 A high-power microscopic image of the skeleton from Turbinaria peltata shows a pattern of both ion-attachment (in blue) and nanoparticle attachment (in green) of new minerals to the skeleton, indicating that both systems are used to build coral skeletons. Courtesy of Pupa Gilbert

Reef-forming corals are marine animals that produce a hard skeleton made up of aragonite, one form of the mineral calcium carbonate. But how the skeletons grow has remained unclear. One model suggests that dissolved calcium and carbonate ions in the corals’ calcifying fluid attach one at a time into the crystalline aragonite of the growing skeleton. A different model, proposed by Gilbert and colleagues in 2017 and based on a study of one species of coral, suggests instead that undissolved nanoparticles attach and then slowly crystallize.

In the first part of a new study, published Nov. 13 in the Proceedings of the National Academy of Sciences, Gilbert and her research team used a spectromicroscopy technique known as PEEM to probe the growing skeletons of five freshly-harvested corals, including representatives of all four possible reef-forming coral shapes: branching, massive, encrusting, and table. PEEM chemical maps of calcium spectra allowed the scientists to determine the organization of different forms of calcium carbonate at the nanoscale. 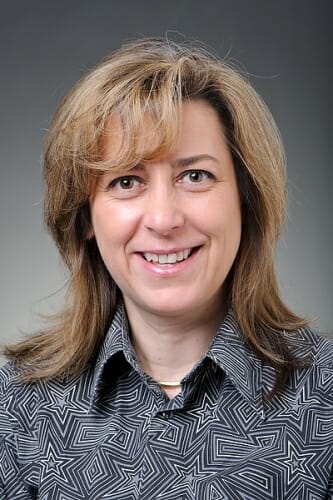 “If you imagine a bunch of spheres, you can never fill space completely; there is always space in between spheres,” Gilbert says. “So that was the first indication that nanoparticle attachment may not be the only method.”

The researchers next used a technique that measures the exposed internal surface area of porous materials. Large geologic crystals of aragonite or calcite — formed by something not living — are found to have around 100 times less surface area than the same amount of material made up of nanoparticles. When they applied this method to corals, their skeletons gave nearly the same value as large crystals, not nanoparticle materials.

“Corals fill space as much as a single crystal of calcite or aragonite. Thus, both ion attachment and particle attachment must occur,” Gilbert says. “The two separate camps advocating for particles versus ions are actually both right.”

This new understanding of coral skeleton formation can only make sense if one more thing is true: that seawater is not in direct contact with the growing skeleton, as has been commonly assumed. In fact, recent studies of the coral calcifying fluid found that it contains slightly higher concentrations of calcium and three times more bicarbonate ions than seawater does, supporting the idea that the growing skeleton is indeed isolated from seawater. 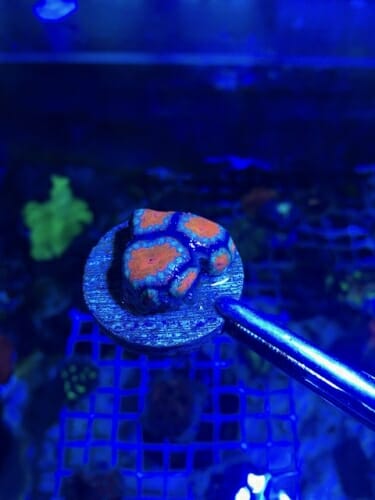 The coral Micromussa lordhowensis was one of five species studied to determine how these animals make their stony skeletons. Courtesy of Pupa Gilbert

Instead, the researchers propose a model where the corals pump calcium and carbonate ions from seawater through coral tissue, which concentrates those minerals near the skeleton. Importantly, this control allows corals to regulate their internal ion concentrations, even as oceans acidify due to rising carbon dioxide levels.

“Up until this work, people had assumed that there was contact between seawater and the growing skeleton. We demonstrated that the skeleton is completely separate from seawater, and this has immediate consequences,” Gilbert says. “If there are to be coral reef remediation strategies, they should not focus on countering ocean acidification, they should focus on countering ocean warming. To save coral reefs we should lower the temperature, not increase water pH.”

Support for this study comes from the U.S. Department of Energy (DE-FG02-07ER15899), the National Science Foundation (DMR-1603192), and the European Research Council (grant agreement No 755876). Spectromicroscopy experiments were done at the Advanced Light Source which is supported by the U.S. Department of Energy (Contract No. DE-AC02-05CH11231).