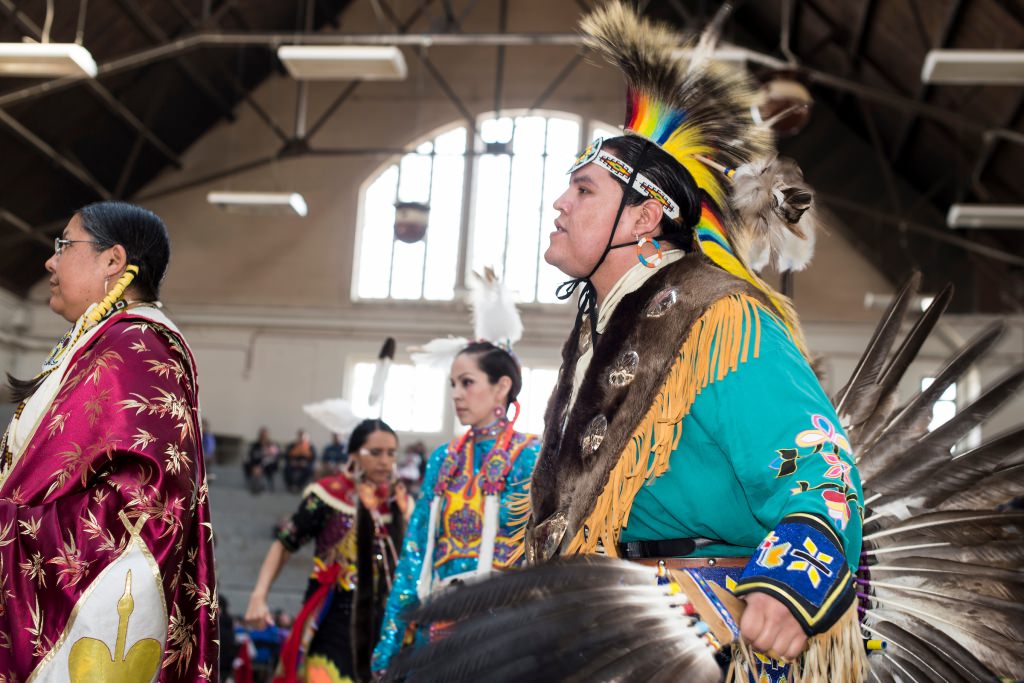 Members from numerous Native American tribes participate in a grand entry drumming and dance ceremony during the Annual On Wisconsin Spring Powwow in 2014. This year’s event will be April 1-2 at the Alliant Energy Center Arena. Photo: Jeff Miller

UW-Madison’s American Indian Student Organization Wunk Sheek will host the 48th On Wisconsin Annual Spring Powwow Saturday and Sunday, April 1-2, at the Alliant Energy Center Arena. The event is free and open to the public.

The On Wisconsin Annual Spring Powwow provides an opportunity to learn outside of the classroom and participate in a contemporary Native event, as well as enhance the Wisconsin Experience by providing the campus and surrounding community the opportunity to share and learn about the culture of the people indigenous to this area. More than 7,000 people attended the OWASP in 2016, says Emily Nelis, co-president of Wunk Sheek, which plans and is lead host of the event.

A powwow is an indigenous gathering to celebrate dance, song, art and food. The On Wisconsin Annual Spring Powwow is unique in its cultural education through engagement with Native nations, a family activity area, and volunteer opportunities for students. The event is very hands-on in order to immerse participants in the experience, Nelis says.

“Having a place where we can express our culture and share it with our campus community benefits us so that we can thrive on this campus.”

Native American students comprise less than one percent of UW–Madison’s total student population, Nelis says. Being so small of a group, Wunk Sheek works hard to pull together its annual event because powwow is a dynamic and vibrant part of First Nation culture.

“This event gives native students a way to express our culture on campus since our population is so small,” she adds. “Having a place where we can express our culture and share it with our campus community benefits us so that we can thrive on this campus.

“It’s very important for Native American people to be acknowledged and for others to know that we still exist. We’re on Native land — Ho-Chunk — here at the university. Surprisingly, there’s a lot of ignorance about our existence and who we are, so this is an opportunity to see first-hand our beautiful culture.”

Nelis, who is a UW–Madison senior majoring in social welfare with a certificate in American Indian Studies and a member of the Bad River Ojibwe tribe, emphasizes the importance of students being able to collectively host an event to share their culture and enjoy time together celebrating Native culture with their community.

“It’s important for students to be able to advocate for ourselves and express our cultural identity while away at college,” she says. Students run and coordinate the two-day event through a variety of roles ranging from staffing entrances to helping vendors and artists set up exhibits and displays, and assisting the performers in running the vital cultural components of the event.

“Surprisingly, there’s a lot of ignorance about our existence and who we are, so this is an opportunity to see first-hand our beautiful culture.”

This year, UW–Madison graduates will be honored on Saturday evening at 7:30 p.m.

“It’s a community gathering for strength, reflection and sharing, as well as a way to re-center for many people,” Kilgour says, especially for students who are from Native communities where they are used to being consistently surrounded by their culture.

“This will make it possible to not only expose students to events and activities on campus, but also put them in contact with other Native students from all over the region who are involved in education,” Kilgour says. “This is a totally different world. For some students, powwow may be the only time they see other community members.”

The powwow also bridges the boundaries of the university and all of Wisconsin’s 12 Tribal Nations. The powwow will be a fluid event including dancing, cultural demonstrations and performances. The Grand Entry, which occurs at 1 p.m. and 7 p.m. on Saturday and at 1 p.m. on Sunday, will feature the Ho-Chunk Nation and Menominee Nation Color Guards, who will lead the opening dance followed by the Head Staff.

“This will make it possible to not only expose students to events and activities on campus, but also put them in contact with other Native students from all over the region who are involved in education.”

The masters of ceremonies will keep the crowd informed by explaining what’s happening throughout the Grand Entry and the dancing that follows. Dance ranging from social to ceremonial has always been an important part of indigenous life. The On Wisconsin Powwow will include exhibition, competitive, social and intertribal dancing, which is open to everyone, including audience members. Although dance styles, content and the outfits of the dancers have evolved over time, their meaning and importance have not changed. There will be more than 30 traditional and contemporary American Indian art vendors from the United States and Canada, an opportunity to learn the importance of regalia through regional Native languages, and traditional Native foods made by Native food vendors.

“We’re going to have a large feast as well, which is culturally important in Native culture to feed our guests and be hospitable in that way,” Nelis said.

This year’s event will have an enhanced interactive Kids Activity Area, where all children can learn about the Three Sisters, a southeastern United States tradition of growing main agricultural crops of beans, corn and winter squash together in a sustainable combination. They will learn the science behind why and how these three crops grow well together, about sustainable agricultural and wildlife management, and the importance of tribal sovereignty.

Other learning adventures will include the opportunity to meet the biologists of the Great Lakes Indian Fish and Wildlife Commission, see live raptors presented by The Raptor Education Group, and participate in a Center for Wildlife Management discussion.