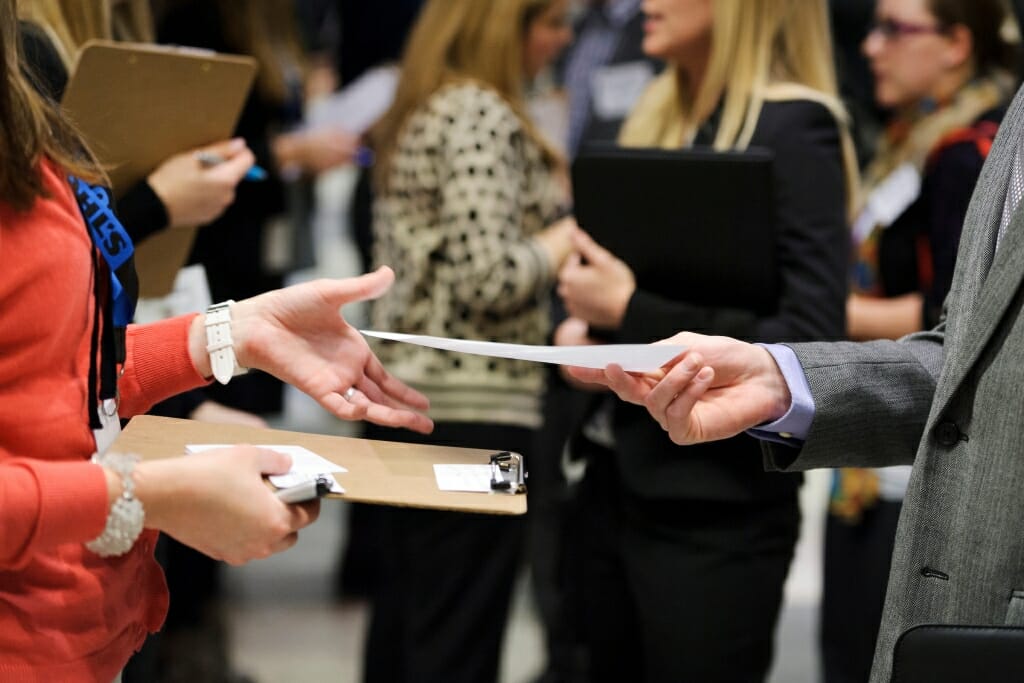 Students spoke with employers at the career fair in 2012. Photo: Jeff Miller

Thousands of UW–Madison students can connect with more than 300 employers from around the world at the Career & Internship Fair, from 4 to 8 p.m. Thursday at the Kohl Center. The fair is for students of every major and any year. Before you go (you can register on Handshake first!), here are some tips from SuccessWorks on how you can shine at the event and use networking to land yourself a job in the future.

Navigating a career fair is easier the more prepared you are, SuccessWorks Career Peer Advisor Marie Aguirre says. Before going, practice your career conversations, otherwise known as elevator pitches, and research the companies you are interested in.

You want to make sure the recruiter knows you’ve done your research, Aguirre says, so after briefly introducing yourself, your major, your year in school and why you’re interested in the company, mention something that stood out in your research about the company.

At the end, ask a question about the company that isn’t easily Google-able, like what other networking opportunities the company has or what tips the recruiter has for landing a job there. “Let the employer know what you want out of this networking,” Aguirre says. “We think of career fairs more as a networking event. You’re not going to walk out of a career fair with a job; You’re walking out with a connection that will help you get the job.”

There’s no such thing as a bad or good resume, only resumes that can be improved, Aguirre says. The bullet points describing your work experience should be specific and tailored to the job you want. Past experience, whether related to the field you hope to enter or not, should only include relevant information for the job you want. “We tell students to start with an action verb, whether that be ‘communicated,’ ‘organized’ … that really expresses some power,” Aguirre says. “And then you want to add to what you did, why you did it, how you did it, and what the purpose of that was.”

Also, Aguirre recommends bringing more copies of your resume than the number of companies you plan to network with. If there are six companies that you plan to connect with, bring several extra in case you run into a company or two that interests you.

One of the most common mistakes Aguirre sees students make is networking with their favorite companies right off the bat. Instead, to warm up, relax and get rid of your nerves, start talking with a recruiter from a company you aren’t as interested in. Later, when you approach the Google weor Microsoft recruiter, you will feel more confident and make a better impression.

The dress code at this year’s career fair is business casual dress, so wear clothes that you feel comfortable in but also look professional. Women shouldn’t feel like they have to wear heels, Aguirre says, and jeans and leggings are off the table. “Recruiters can tell when you’re uncomfortable,” she says. Pro tip: wear your name tag on the right side so that, when you go to shake the recruiter’s hand, they won’t have to crane their neck to read your name.

If you’re a shy or anxious person, career fairs can be especially chaotic. If you are nervous, carve out moments where you can feel less shy, Aguirre suggests. Having a one-on-one conversation with anyone, whether a random recruiter, student, or one of SuccessWorks’ staff at the event, will give you more confidence to approach the recruiter of your dreams.

The company you apply to in the future will likely have a stack of resumes, Aguirre says, so it’s your job to stick out. Even just coming face-to-face with a recruiter will help your resume stand out, but if you want more of an edge, try to be memorable to the recruiter.

Aguirre suggests writing something memorable about your interaction on the back of the recruiter’s business card when you’re done networking. Whether it’s an anecdote that was shared or a sports opinion, it will help you later.

As Aguirre explains, “When you follow up, which you should always do, you can really make yourself known … if you talked, even really briefly, about, ‘Man, that football game on Saturday was such a shame,’ mention that in your email so they have an idea who they spoke to.”

SuccessWorks will hold a career fair prep session at the Pyle Center on Wednesday, September 19 from 6 p.m. to 7:30 p.m. Here, students can practice their elevator pitches and have their resumes reviewed. SuccessWorks advisors will also have a student center at the fair on Thursday where attendees can relax, talk with an advisor, and go over networking tips. In addition, SuccessWorks offers scheduled advising appointments, drop-in appointments for College of Letters & Science students Monday through Friday from 11 a.m. to 2 p.m., and other networking events throughout the year.