Dawn at the Rising Star Expedition campsite near Johannesburg, South Africa. The site is part of an area known as the Cradle of Humankind because of the number of important paleoanthropoligic discoveries that have occurred there. Photo: John Hawks, UW–Madison

Not far from Hand Land and just down the hall from the Tooth Booth is Hip Heaven.

Neatly arrayed on a table in this classroom-sized fossil vault in South Africa are a few fragments of brittle hip bone recently retrieved from the nearby Rising Star Cave. It is these bits of pelvis that have brought University of Wisconsin-Madison postdoctoral fellow Caroline VanSickle halfway around the world to Hip Heaven, where she compares and contrasts the newfound bones with hip fossils from other hominins.

“[This project] changes how human origins research happens by involving early career scientists with an emphasis on making the fossils widely accessible to everyone. That will only improve the science.”

Here, she and nearly 30 other paleoanthropologists — each selected for their expertise on a part of the human anatomy— are puzzling over a trove of more than 1,500 newly discovered fossil hominin bones. Their task is to reconstruct a creature previously unknown to science and that represents a new branch of the human family tree, Homo naledi.

The sheer volume of fossils — representing at least 15 individuals ranging in age from newborn to elderly — is unprecedented. The bones were collected in November 2013 from the barely accessible chamber of a South African cave where, at some point in the distant past, Homo naledi routinely interred their dead companions.

The discovery of the fossil chamber was made after amateur cavers exploring the Rising Star cave complex spotted a skull and alerted paleoanthropologist Lee Berger of the University of Witwatersrand, who organized an expedition to retrieve the fossil and whose Evolutionary Studies Institute vault now houses what turned out to be an astonishing haul of hominin fossils, the single largest such collection ever found.

The job assigned to VanSickle and her colleagues is to piece the bones into a coherent whole and compare them to the bones of other known hominins. Hip Heaven is, in actuality, a small table shared with other experts analyzing the bones that make up the thorax — the rib cage and the spine. The experts from the thorax table, VanSickle explains, are teaming with her and an expert on the thigh to see how the Homo naledi pelvis fragments fit into the skeleton. 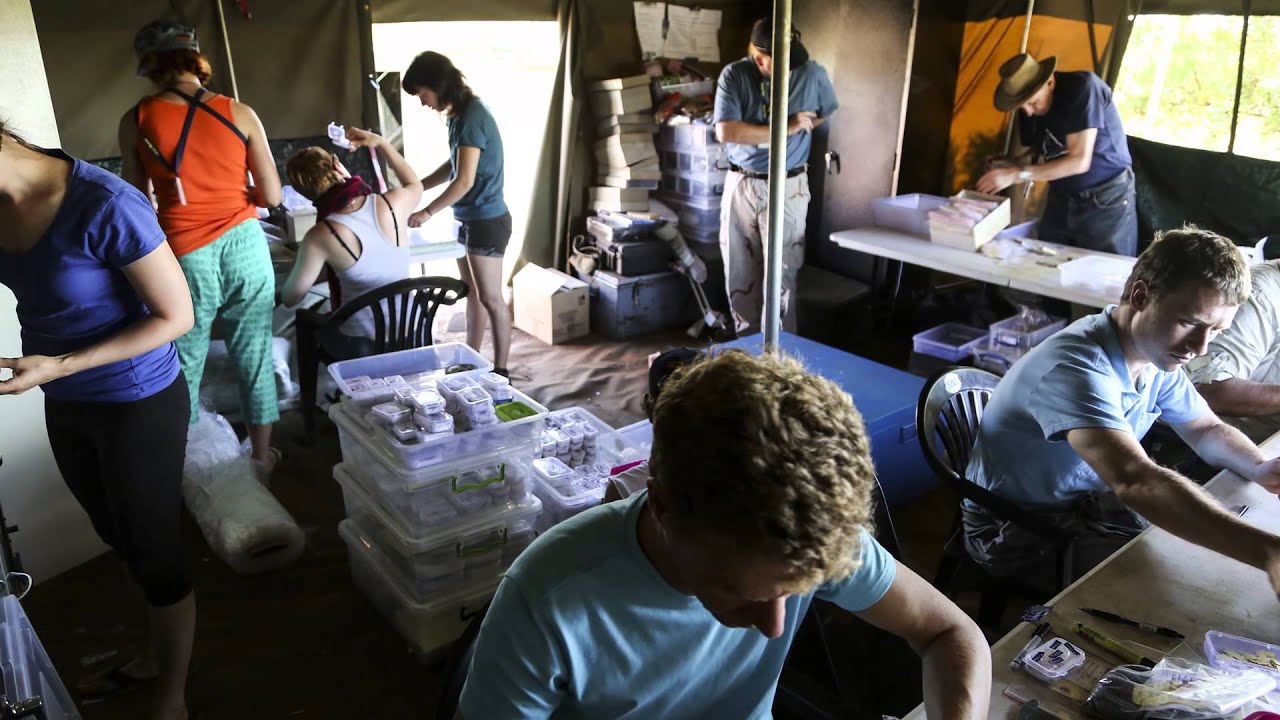 “None of this goes together the way we expected,” notes VanSickle, who has a background in anthropology and holds her postdoctoral fellowship in UW-Madison’s Department of Gender and Women’s Studies. “Homo naledi has this weird combination of traits that we wouldn't have expected to see together.”

From a distance, the creature would have appeared nearly human, explains UW-Madison paleoanthropologist John Hawks, the expert helping oversee the reconstruction workshop. “They walked upright. They had very small heads compared to ours,” says Hawks. “They are very thin, very skinny looking” in their limbs with a wide torso.

The creature that the bones depict was likely a great long-distance walker, and powerful hands and a broad thumb suggest it was an adept climber as well.

Among the Homo naledi fossils, the pelvis is not the best represented, with only about 40 brittle bits and pieces of hip bone from multiple individuals of different ages collected so far, making VanSickle’s job less than straightforward.

“At many other hominin sites where pelvis fossils are found, there will only be a few pieces from one or two individuals, but those pieces may be fairly complete,” she says. “The downside is that the Homo naledi fragments are far less complete than fossils from other sites, so figuring out how they fit together and what they mean for how Homo naledi walked or gave birth is much more difficult.”

Still, she is hoping that the Homo naledi necropolis, which still has many more fossils to be retrieved, will yield a more complete pelvis because the hip, in any paleoanthropological context, is informative. It can help answer a raft of questions about how Homo naledi looked and behaved, how it walked, gave birth and, with examples from across the lifespan, how it grew.

VanSickle studies casts of pelvis fossils from comparative specimens at "hip heaven" in the Wits bone vault at the Evolutionary Studies Institute at the University of the Witwatersrand, Johannesburg, South Africa. Photo: John Hawks, UW–Madison

“The pelvis, being at the center of the body, affects a lot of things,” VanSickle notes. “There’s a lot going on there. It’s a transition point, and in Homo naledi we have to account for a wide lower torso attached to very long and narrow legs.”

One curiosity of the Homo naledi pelvis is a flared ilium, the large bone that comprises much of the upper hip. A flared ilium sticks out more to the side and can widen the pelvis dramatically. Had the Rising Star fossils been found alone, outside of the nearly complete skeletal context of Homo naledi, they would likely have been assigned to Australopithecus, an early hominin best known through the prism of the famous Lucy fossil. “You don’t see this flared an ilium in later hominins,” VanSickle explains. “This is bizarrely Lucy-like. It is strange that it is so similar, especially for something that has other features that are very much like humans.”

VanSickle is looking forward to the next chapter in the story of Homo naledi. That chapter could be written soon as many of the findings about this new species of hominin will be published quickly, which will provide data and access for many other researchers so they might draw their own conclusions. The relatively rapid turnaround is due to the concentrated efforts of the nearly 30 early career scientists recruited by Berger to analyze the fossils. Designed as a group workshop, the venue provided an extraordinary opportunity for young scientists to gather firsthand experience and data working with rare African hominin fossils.

“This project not only introduces a newly discovered species of our own genus, one that will recalibrate the field’s ideas about human origins; it also changes how human origins research happens by involving early career scientists with an emphasis on making the fossils widely accessible to everyone,” says VanSickle. “That will only improve the science.”